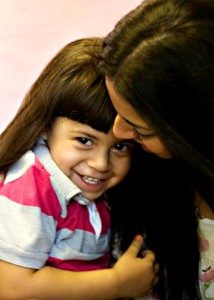 Gysella
Sponsored by Phoenix First Church of the Nazarene
The Bridge December 28, 2007 through October 25, 2009

My daughter Sarah and I entered in the Bridge during December 2007 and we were trying to find safety from a very deep and controlling individual…Sarah’s father.

While I was married to her father, everything seemed perfect until he started showing his true colors. His aggression was not physical; it was mental and controlling in a scary way. He controlled my life, phone calls, clothes, food, money and the most painful of his “things” he tried to control was my little baby girl.

I changed from a very colorful, bubbly and smart person to a bitter, suspicious and fearful person. I started thinking that I was not intelligent or capable to the point that I could not think clearly in order to solve problems. I was not permitted to drive, which made his power over us grow. I was never able to go to the grocery store by myself, go shopping without supervision or be a normal mother to Sarah. I was prohibited from locking the bathroom door because he had to know exactly what was going on at all times and I had to ask permission to do anything.

I started to get sick often, gain weight abnormally, my face was covered with acne from the stress and I had no energy. My permanent state was depression and fear. My daughter was the only reason to keep going.

I thought I was doing ok and that sacrificing myself, my emotional stability and my entire life was the right thing to do to keep things “normal”, so that my daughter could live a reasonably “normal home”. I felt trapped inside my body and unable to do anything, because when you are mentally controlled, you become a follower; you are owned.

In October 2007 the situation was out of control and after he left for work very early in the morning, I hid in the bathroom to pray because I was under surveillance – always. It was still dark and a little chilly outside, my daughter was asleep. The Lord spoke to me like never before …Get out of here!!!!

I packed the most I could into plastic bags and took my sleeping baby into my arms, called the police and got out of that house feeling the most fear I have ever felt in my life. I knew I was doing the right thing.

I found a domestic violence shelter to stay in temporarily. Desperate to get a place to live, the case manager provided me with a list of transitional housing programs. I applied for every single one. No one called me. I couldn’t stay any longer at the shelter and the divorce proceedings had started. With no job, money or place to stay with my baby, my only option was to return to the man I had escaped from – my husband. Finally Amy Sue, from The Bridge, called me for a phone screening interview. I thought – What took you so long????!!!! I went to bed that night excited, but scared because if I didn’t receive that call the very next day, I would have no choice but to return to my husband.

The next call I received asking, “Are you ready to move to The Bridge?”

Give hope and a home to a single mother

All you have to do is have a willing heart!

The Bridge to Hope, Inc.