19 days prior to my release from incarceration I still did not know where I was going.  A social worker with the Maricopa County Jail system contacted The Bridge to Hope on my behalf. Perhaps it was because she saw something in me.  I myself didn’t see much. I was a 24-year-old convicted felon with a life style that had caused my son to be taken from me and put in foster care.

Hoping to get accepted, I completed an interview with The Bridge to Hope while I was in jail.  Maybe they saw something in me too, because they accepted me.

On December 30, 2014, I was released from jail.  Amy Sue was there to pick me up.  I didn’t know what to expect. What I did know was that I wanted to be freed from being in prison. Literally, but also freed from a destructive lifestyle where substances ruled my behavior.

When I moved into my new home at The Bridge to Hope I brought with me a plastic bag of paperwork. I was still wearing the clothing I had been wearing when I was taken into custody in April.  That was all I had.

I may have come with very little, but what I received was so great!  What I learned later is my team from La Casa de Cristo Church was preparing and praying for me.  I received a fully furnished apartment.  I also received a mentoring team designed to help me begin to rebuild my life.

What The Bridge to Hope didn’t know was while I was in jail the State of Arizona had motioned to terminate my rights to my four year old son.  Was history repeating itself? What I had feared most was repeating the pattern I had experienced as a young child.  I beat myself up every day for what I was doing to my son.

A short time later I attended a Foster Care Review Board with Amy Sue. This is where The Bridge to Hope learned the courts intended to sever my rights and place my son up for adoption.  Several at this review, including myself, thought B2H would turn me away.  But they didn’t, they stood with me advocating and supporting me.  They even testified at my court hearings.  With a lot of hard work on my part and undeserved grace, the courts reversed their decision and my son was returned to me.

Within a year of entering The Bridge to Hope I accomplished more than I imagined I ever thought I could.  I completed Vocational Training and obtained employment working as a Peer Support Specialist.  I earned an early termination from probation.  I obtained a valid driver’s license and purchased a car.  And I was able to move into an apartment where I am able to provide a home for myself and Joe.

Yes, with God’s help I accomplished many goals.  I think where The Bridge to Hope is most proud is my adoption, my adoption into Christ’s family.  In Ephesians 1:5, we learn we can be adopted into God’s family.  God decided in advance to adopt us into his own family by bringing us to himself through Jesus Christ. This is what he wanted to do, and it gave him great pleasure.

I accepted Christ while at The Bridge to Hope largely because my team from La Casa shared Him every week by taking me to church and loving me.  The greatest gift I get to share with my son, is my faith.

I want to thank La Casa for their commitment to the ministry of The Bridge to Hope and to me.  They gave selflessly of themselves so that I may have an opportunity to make a fresh start.

I am thankful to everyone who supports The Bridge to Hope, for you have given me the gift of a new future. 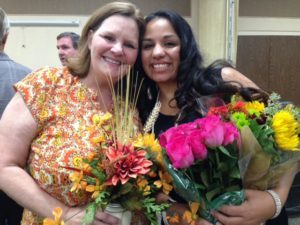